With reports of rain hitting the press for Saturday’s Escape into the Park it is a pleasant surprise to wake up to find glorious sunshine seeping in through my bedroom window and it seems the festival wellies and wet weather gear are no longer required.

Heading for Cardiff train station inevitably we bump into a few stragglers that still haven’t made the mornings rush to the festival and with mobile phones pressed to their ears and overheard conversations of “Are you in yet and what is it like?” It seems that a late arrival was the more wiser of choices with reports of between a three and four hour wait for entry; “how early did they actually get there anyway?”.

Swansea Singleton Park is the perfect venue for a legal rave with an expanse of green that stretches into the distance and undoubtedly you could fit another four Escape into the Park festivals inside the grounds (or at least it seemed).

As we arrive at the main entrance there are stringent searches made of belongings and you could almost supply the European Community with an alcohol mountain with the collection of unopened cans and bottles that are littered outside the gates. On entering the festival the long arm of the law have come out in their masses with sniffer dogs and handlers galore but they are all in a jovial mode and are more than happy to pose for photographs.

As we make our way over to the VIP area we are almost blinded by the Technicolor and creativity of fellow revellers outfits ranging from green, shocking pink, combat style, Top Gun uniforms, 118-118 and those that are daring to display flesh that only a mother should see (or a partner of course).
Once inside the VIP area you seem to hit a bit of normality in the masses comfortably accommodating the over 30s crowd that learned to appreciate the finer elements of raving in their earlier decades. 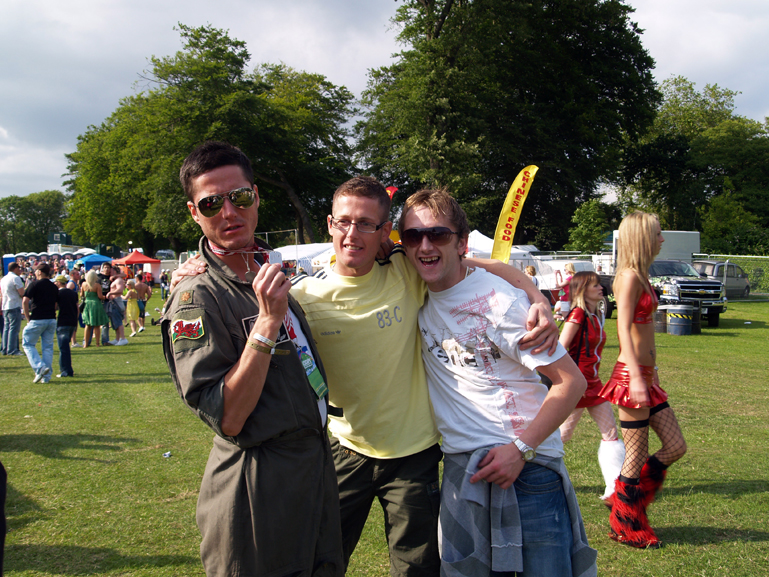 A trip to the toilet is always a chore at a festival and this is no different even in the VIP area you have to queue for at least 30 minutes however those that a slightly more by way of alcohol at this stage (3.30pm) head for the nearest bush or behind the back of the toilets; even some girls in full view of the passing crowd stooping and scrambling to pull their knickers up.

Littered around the edges of the park are stalls that you can buy an array of goodies inclusive of herbal highs which unless you want to walk around like you have had 100 cups of Espresso I would stay well clear of! 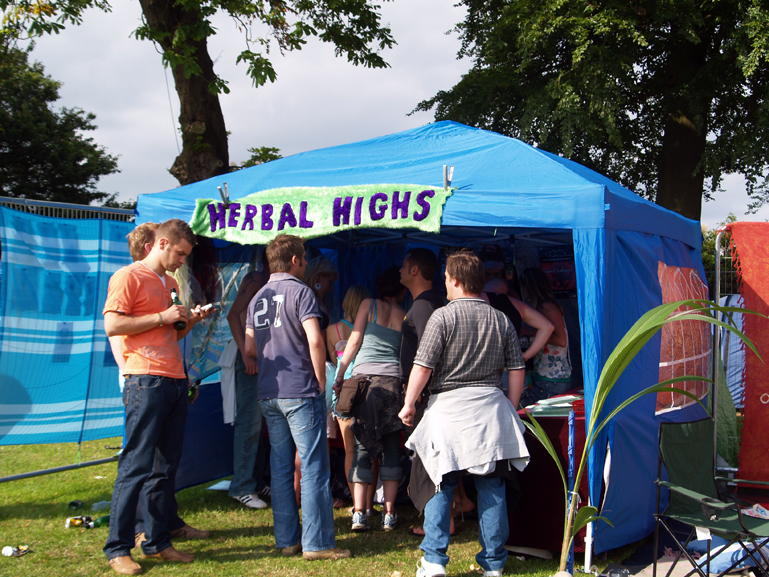 Spread over a main stage and five arenas Escape has all the well seasoned raver desires in fact you are spoilt for choice with Scratch Perverts, Dave Pearce, Judge Jules, Lisa Lashes, Tidy Boys, Underworld and many more to boot.

Each arena could almost be the dark side of the moon with lasers that shoot across the crowd and smoke that really gives an atmospheric feeling for all that want to push to their limits. Arriving to watch Judge Jules set in the Gods Kitchen Arena the music is almost deafening as The Judge gives it up with his authentic style of trance whipping ravers into a frenzy of movement and sweat.
Over to the L’America Arena Craig Bartlett is spinning his ‘Soulful House’ message to the crowd as they all funk out too his spins.

As the evening winds to a close we make our way around the crowd and take some time out to hit the fun fair which I have opted for a ground side view opposed to a seated ride. In my earlier years all that spinning and G Force were an allure now all they seem to make we want to do is puke even looking at the rides make my head spin these days. Fun Fare is for the youth and there is enough youth in this festival to bottle it as we watch them launching themselves high in the sky on rides which enable you to see the contents of their stomachs and as some wobble off the rides and flop on the floor I was happy I decided on the spectator option.

Each festival brings with it the local celebrity and this year was no different as we bump into Pritchard (Dirty Sanchez) and his motley crew and some Welsh woman who apparently appeared on Big Brother.

The main stage was the only way to end this years festival with Underworld headlining and who seemed to bring along a backdrop of giant inflatable sausages in a range of different colours (or is that my interpretation); however to others they may look like giant Marshmallows either way it gave me a giggle. As I say the old ones are always the best as they played the festival out with Dark And Long and my favourite track of all time Born Slippy which is always a crowd pleaser.

As the crowd are ushered to exit Escape in the Park it is now a new mission to get home and my advice would be to book a coach or a hotel as the trains out of Swansea and the station closes so unless you want to be sat outside Swansea Train Station until 3am make your route home in advance and stick to it.

Thanks Escape into the Park for yet another fantastic day bring it on for next year.